One Mini Every Week #9

For this week's project I thought I would have a go at painting up one of the Reaper Bones miniatures that I have lying around... 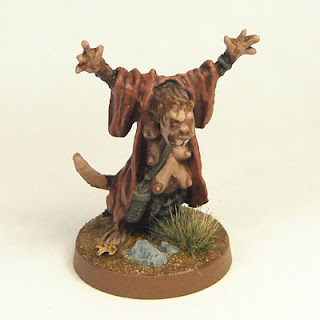 ...and I'm rather disappointed to say that this mini is pretty horrible (especially since I had rather high hopes for the range). There is almost no detail at all in the figures face, and I'm a little bit embarrassed to show it to be honest (though I suppose a better painter might have a bit more luck with this one).

However, I have about a dozen of these 'Bones' figures in my collection ...and since I was so disappointed with my first one, I figured I'd splash some paint on a few more - rather than judging the entire line on one mini... 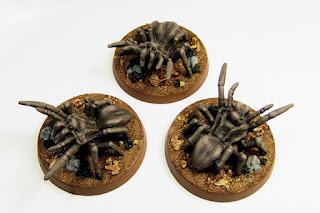 ...and, as you'll hopefully see, these giant spiders look a lot better (despite my rather hurried paint job), and I'm quite tempted to pick up a couple more (as you can never have enough giant spider mini's right?).

So, despite my initial disappointment, my faith in the range isn't lost yet, and I think I'll try painting up a few more 'Bones' mini's in the coming weeks, before I deliver my final judgement.