I'm pleased to say that the next overland map in the 'hex-map' range is now available... 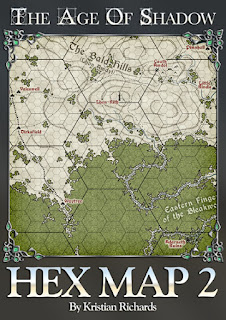 Like its predecessor, Hex Map 2 contains both a labelled and unlabelled version of the map - so that you can use it conjunction with the default setting of the Age of Shadow role-playing game -OR-  use it to detail an area within your own homebrew campaign world* (adding place names of your own devising).

It's also worth noting that this map depicts the area to the immediate west of Hex Map 1 (as shown below)... 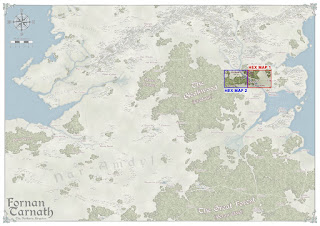 ...both of which depict a detail view of that particular region of the Northern Kingdom.

Hex Map 2 is available for $1.99 from DriveThruRPG and RPGNow.