I didn't get around to photographing last week's miniatures (due to all 3 camera batteries being flat) ...but I did manage to finish off the last two Frostgrave Gnolls that I assembled the week before... 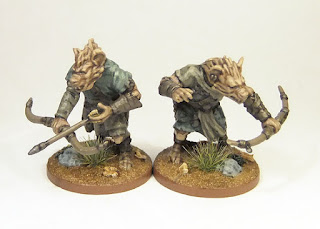 ...and, as I have said previously, they're nice little mini's - and now that I've got all five painted, they'll make a nice little beastling warband for my Age of Shadow games.

So, now that I'm caught up again, here's a picture of this week's miniatures... 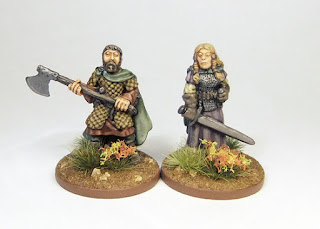 ....and these two are going to represent a couple of the PCs in my current Age of Shadow campaign*

The miniatures themselves are from Midlam Miniatures (THIS ONE and THIS ONE) ...and I rather like how they've turned out (plus they only cost £2 each ...so you really can't grumble at the price).

Furthermore, these are the first miniatures to feature some of my home-made grass tufts and flowers (that I mentioned in THIS post) ...and although they can be a bit tricky to remove from the backing (unlike the pre-made ones I've bought in the past) I think they look just as good :)

*The players actually picked out these mini's some time back - so I thought it was about time to slap some paint on them.