For this week's painting project I've painted up a couple more 'ratmen' miniatures (that I'll be using as Age of Shadow lesser beastlings)... 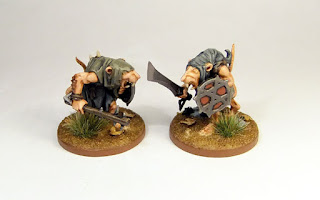 These particular ones are GamesWorkshop Clanrats - but as I've mentioned before, since I'm using them for RPG purposes I don't really need a whole box of them, so I'll generally pick up the parts to make half-a-dozen or so models from the various 'bitz' websites out there (THIS ONE for example).

But what do I think of the models themselves...

...well, I kinda like them. They are very easy to assemble (as you just need to stick on the weapon arm and shield), and they paint up nicely (though I did make it harder for myself by gluing the shields on before I started painting them).

My only real gripe is that, although they come with a variety of different torsos (some armoured, some unarmoured, some wearing hoods, some bareheaded, etc.), they all seem to be in a very similar (almost identical) pose.