As regular followers of the blog will probably know, back at the beginning of the year I made a resolution to try and paint at least one miniature every single week throughout 2016 (or at the very least - do something miniatures related).

Well, it's the last week of the year, and I've somehow managed to stick at it! (though I've also purchased a bunch of new mini's throughout the year - so I'm not sure if I've managed to lessen my unpainted stockpile or not ;) ).

Anyway, for this week's project I've done something a bit different (and I've also cheated a little - but more on that later), as I seem to have been bitten by the WW2 bug again. So here's what I've painted: 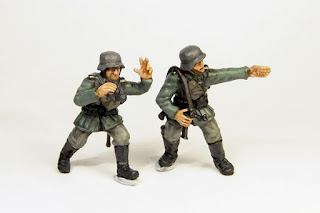 Both of these mini's a from Warlord Games' plastic Bolt Action range, and I've assembled them to use as crew for a Marder III tank destroyer (note that I originally painted up a couple of metal crew members from the same range ...but they are tiny by comparison, and so I'll not be using them :( ).

However, for the Marder itself I've cheated somewhat (as I hate painting tanks or large models) and have opted for a pre-painted 1:48 scale model from China (as they only cost £7.99 delivered, from this ebayer - though they obviously take a few weeks to arrive). 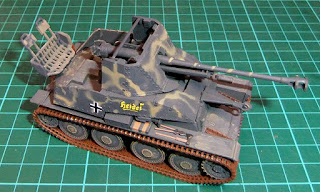 Now the paint job on the model is nothing to write home about - but I think it's an acceptable 'tabletop quality' ...and after the crew have been added I think it actually looks more than presentable: 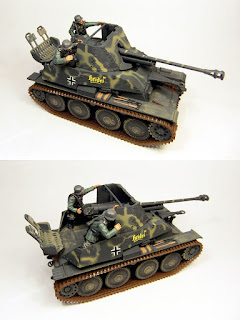 So that's pretty much it for the 'One Mini Every Week' project ...and all that's left to do now is to take a group photograph of all the mini's I've painted throughout the year (which will probably be a separate blog post next week - assuming I can find the time).