Sometime last year I was approached by SquareHex (a UK company that produces various roleplaying stuff) to see if I would be interested in them producing hard copies (i.e. pre-printed sheets) of my 2.5D dungeon ...to which I obviously agreed (note that you can see the original blog article HERE).

Well, it would seem that the 'starter set' has gone down pretty well (as we're now into the second printing :) ), and so we've been chatting again, and decided to print a new set (that complements the first one rather nicely). 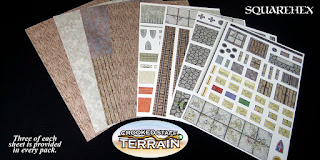 So, as you can see in the picture above, this second set (which is available HERE, for just £3)  provides you with a wide variety of textures - all of which can be used to produce various bits of furniture and scatter terrain for your dungeons. In fact, if you check out the following video, I quickly run through the kind of things that you can make with some of these.

Furthermore, the release of this new set has coincided with the YouTube channel reaching its next milestone of 2500 subscribers (which is pretty amazing) ...and to celebrate I'm giving away a set of these new textures to one lucky winner.

So if you want to be in with a chance of winning, check out the following video, and leave a 'Count me in!" message in the comments section of the video itself:


And that's it for this little update. A huge thanks goes out to everyone that's supported me thus far (and a big thanks to SquareHex for making this happen). Here's to the next 2500 subs (assuming I ever make it that far)!