The Age of Shadow : Encounters in the Northlands

It has been a long time coming, but I am finally able to announce that Encounters in the Northlands is now available for sale: 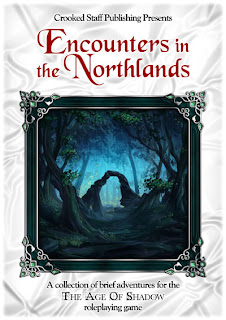 Encounters in the Northlands is a 52 page booklet for use with the Age of Shadow fantasy role-playing game, and features the following four adventure scenarios:


The Shadowstone
A traditional style of adventure that pits the adventurers against fearsome undead creatures in a dungeon-style encounter.


Aleglin & Elmina
This is a scenario in which an elven lord had returned home after long years of imprisonment only to discover that agents of the Enemy have proceeded him.


Mathgar Ruins
Mathgar Ruins* is not an adventure in an of itself, but rather a fully detailed encounter location that the GM can tailor to his/her own quests and adventures.

Also included in this product are a number of VTT maps and miniatures scaled battle-maps that can be used in conjunction with the encounter locations detailed in the booklet.

Encounters in the Northlands in available from RPGNow & DriveThruRPG for just $3.99 (approx. £2.50).


*note that this is a slight reworking of the existing download that can be found on the AoS website (containing better maps and a few improvements/changes) - and has been included in the Encounters in the Northlands booklet as an added bonus.