Now that the Encounters in the Northlands booklet is available, I thought that it would be a good time to share some tokens that I made a little while back which can be used to represent some of the characters & monsters in the Age of Shadow RPG (though they can of course be used for any game/system). 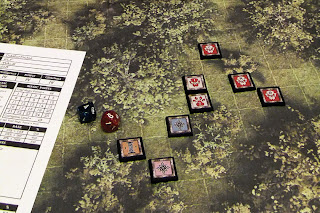 As you can see, the idea behind them was to have them print out at a size that can be glued to the top of a one inch square miniatures base (as seen in the photo above) - so as to give them a little more weight and durability.

Obviously, they are no substitute for nicely painted character/monster miniatures (at least for folks like me that are a fan of such things) - but because the images are fairly abstract, they can be used to represent whatever monster/creature you desire (for example, in the above photograph the PCs are facing off against a beastling captain (1), his three bodyguards (A, B, & C), and his dire-wolf tracker (2) ) ...not to mention the fact that you can just throw them into a small plastic bag for transportation & storage.

If you want to grab them for yourself, you can find the pdf file HERE