Seeing as how the new 5E 'Adventures in Middle Earth' book (by Cubical 7) will be released soon (and I'll probably be picking it up from my FLGS as soon as it does), I've dug deep into my stockpile of unpainted miniatures for this week's painting project... 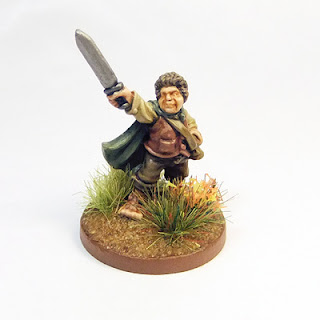 ...and I'm pretty pleased with how the little guy has turned out :)

When I purchased this miniature (which was a looooong time ago), I'm pretty sure it was part of Black Tree Design's (defunct) Lord of the Rings line.

However, after a bit of digging I've discovered that the same mini's can now be had from 'Scotia Grendel' (should anyone be interested in picking one up for themselves) - with this particular figure being sold as part of THIS set of three halflings.

But yeah, it's a nice little miniature, and was fun to paint ...and to better illustrate just how little this guy is, here he is pictured next to one of my human adventurers (from Midlam Miniatures): 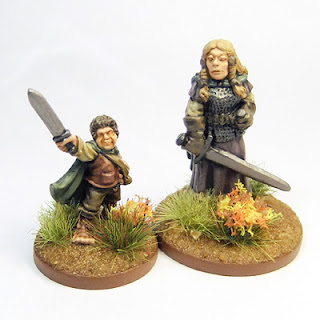