Rusty hangers and the remnants of old weapon racks line the outer wall of this long room, most of which stand empty. In the far corner is a raised pallet covered in grimy pelts, next to which stands a small table and high backed chair.

OCCUPANTS
The elegant elvish arms and armour that once graced the walls of this room have long since gone, as have the bright banners and delicate wall hangings. Now the chamber is home to the cruel beastling captain and his dire wolf tracker.

Here sits a beastling brute of great stature, with long sinewy arms and an evil face scarred with many old wounds. At his feet lies a huge wolf-like figure, easily as big as the seated figure, chewing on the scraps of meat and bone tossed to it by its master. 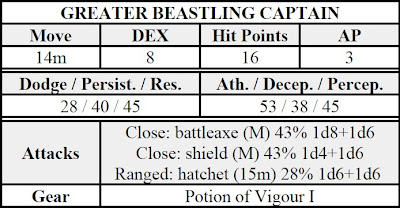 When not accompanying his troops on a raid, this is the place that the captain is most likely to be found (though he will of course investigate any disturbance in the room next door, or occasionally make his way up to the top of the keep to check on any prisoners in area T5. There is also a 10% chance that another beastling is present here, perhaps bringing food and drink, making its report, or receiving new orders.
NOTES
Unlike the rest of the beastlings here, the captain will have a reasonable understanding of the elvish and mannish tongues (50%), and will usually have been given some specific task or mission to perform by its own superior (what that may be is largely dependant on the type of adventure/campaign the GM is running).
On the other hand, the captain's dire wolf serves only its master, and is happy so long as it has food in its belly. However the creature is disliked by most of the other beastlings/wildlings - as it is not unknown for someone who has displeased (or failed) the captain to be stripped and beaten, and then given to the wolf for sport.
As for the room itself, the few weapons that are kept here are of beastling design (1d3 spears, scimitars, and shortbows), and a wooden box is stowed beneath the pallet upon which the captain sleeps (simply looking beneath the pallet will reveal this, otherwise a perception test is required). In the box will be various gaudy treasures and baubles that the captain has taken for his own (treat as 250BV worth of trinkets).
In addition, one of the stone floor slabs conceals a secret storage space that the current occupants have yet to discover. Finding it requires a difficult (-25%) perception test, and inside can still be found a pair of matching elvish shortswords.
ITEMS OF INTEREST
Both swords (found in the secret compartment mentioned above) are engraved along the blade with dwarven (non-magic) runes - though the words themselves are in the elvish tongue. As such, anyone who is able to read the dwarven script will be able to reveal (should they so desire) that the inscriptions read Lindathol and Andagad - which in turn can be translated (by someone who speaks elvish) to mean 'battle-song-blade' and 'bright-iron' respectively. 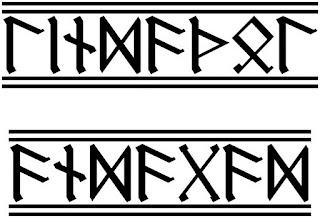 In addition, a successful Culture (elf) or a suitable Lore test will reveal the swords to be typical of those used in the great wars of the north some five hundred years ago. A critical result on this roll (or perhaps further investigation in future adventures) will also reveal that these particular blades were forged for the twin sons of Lord Arenill* (the last lord of Garad Mathgar), though both perished (as did their parents) in Mathgar's fall while still very young.
However, despite their age, the swords appear to be in incredibly good condition (and very nicely made) - as they are made from dwarf-steel (giving them a +10% bonus to the users Close Combat skill when used, and an extra point of non-magical damage). 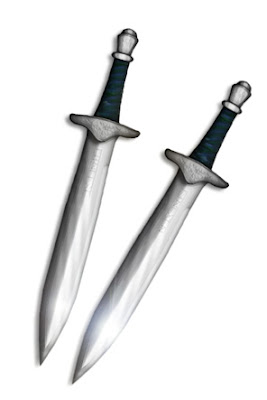