D U N G E O N S
Note that unless otherwise stated, this entire level will be unlit and noticeably colder (and damper) than the rest of the keep. 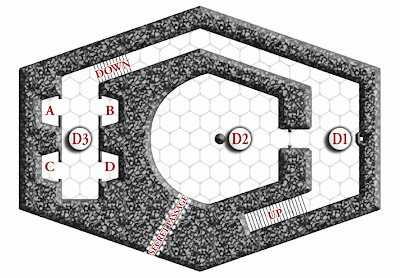 D1. Workshop. This workshop and smithy once contained a small forge and a wide variety of craftsmen tools. Now though, the room has a much more sinister use, and what rusty tools remain have been turned into cruel instruments of torture (pokers, clamps, and gougers for the most part).
NOTES
If the beastlings/wildlings are currently holding a prisoner (or two), it is entirely possible that they may be found here if the GM so wishes - no doubt accompanied by one or two of the beastlings from the level above (possibly even the beastling captain) who are in the process of slowly extracting information from their unhappy guest. If this is the case the area will be illuminated by a small brazier of hot coals.
D2. Storage. Once used as a cold stores, this room now serves as the lair (though prison might be a better term) for a half-starved fellgrim brute.
OCCUPANTS

A filthy create of giant-like proportions is slumped against the central pillar of this large chamber - surrounded by piles of broken bones that appear to have been picked clean. The beast itself is covered in matted fur and about its neck is a thick collar of iron - from which trails a sturdy chain.

The creature is secured to the central pillar with around 6m of thick iron chain that gives it just enough room to move around the whole chamber. This is due to the fact that the beastlings have discovered a secret entrance (normal perception test to find) leading into (or out of) the keep from this room - and a hungry fellgrim is seen to be the perfect guardian should anyone attempt to gain access this way. However, there is a 40% chance that the creature will be sleeping at any given time (treat any deception tests to sneak by as easy), and a 5% chance that a beastling is present in the doorway - tossing it a few scraps of food.
Also note that the fellgrim found in this room is one of a particularly low intelligence, and (depending on the type of game that the GM wishes to run) can be portrayed in two very different ways.
The first of these is one where the creature has a childlike understanding of the world about it, and as such can be manipulated by the PCs (or even genuinely helped). If this is the case the GM may allow the players a chance befriend the beast (or confuse it enough to think them friends), and maybe even convince it to turn upon its masters (assuming they can find some way of communicating with it). Most of this can be handled though role-playing out the encounter, though an opposed Influence test may be allowed (perhaps modified by how well the players have role-played) to help things along.
The second (and more likely) option is to simply assume that the creature is no more than a feral brute - who is just as much danger to its allies as it is to anyone else (hence the chains).
NOTES
The secret entrance in this room provides the PC's with a relatively easy access point to the keep, and so the GM may like to take this into account when designing an adventure to go along with this encounter site (i.e. the PC's should be given ample opportunity to learn about the secret entrance prior to investigating the keep).
D3. Dungeon. Most of the time the stairs leading down into this area will be partially flooded so that the passage below is around 1m underwater. As such the prison cells are never visited by the current occupants, especially since the keys have been lost or destroyed. However, anyone attempting to lock/unlock one of the doors here will be required to make a mechanisms test to do so. Alternately, anyone attempting to force a door open will need to succeed a hard (-50%) athletics test.
a. Cell. Open and unlocked.
b. Cell. Closed and locked.
c. Cell. Closed and locked.
d. Cell. Closed and unlocked.