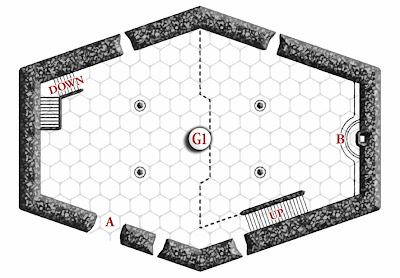 This spacious hall must have once been a sight to behold - with many fine tapestries and ornate carvings upon the walls and pillars. Now though the whole chamber is strewn with dirt and debris, and what little is left of the tapestries hang in tatters.

OCCUPANTS:
This room is usually unoccupied apart from two wildlings that are tasked with guarding the door.

NOTES:
Once an elegant hall, this large room is now all but empty - seemingly long since plundered of anything of worth. However, it will soon become apparent to anyone who ventures further into this room that far end of the hall is overlooked by a balcony on the level above (indicated by the dashed line).
AREAS OF INTEREST:
A. Main Entrance. The main door to the keep is rather large and has a habit of sticking - requiring a simple (+25%) athletics test to open. In addition, whatever locking mechanism it might have once possesed is long since gone - but the door may still be barred from the inside making it near impossible to force open without the aid of siege equipment.
However, the door is not usually barred (unless the current occupants are expecting trouble), and anyone who knocks upon the door twice and then three times (after a short pause between) will usually have the door opened for them (assuming they are expected).
B. Grand Fireplace. A large fireplace of carven stone dominates the whole of the far wall, though the delicate figures and scenes engraved upon it are all but unrecognisable. Anyone spending any time examining the fireplace will see that it has clearly been marred by cruel hands.
Additionally, anyone who takes the time to examine the fireplace in greater detail should be allowed a perception test to discover a secret compartment that still holds an ornate gem-studded brooch (worth around 1000BV) that also functions as a magic point store (1 point - though it is currently empty). 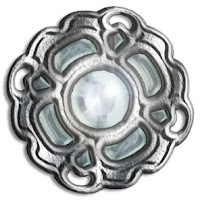 However, due to the damage that the fireplace has sustained, a successful mechanisms test will be required to open the compartment (alternately, if brute force is used, a difficult (-25%) athletics test may be attempted).