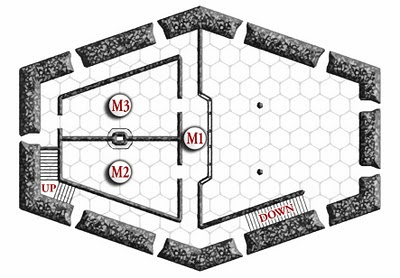 M1. Balcony.
The balcony looks out over half of the hall below (towards the fireplace) where great feasts and merrymaking once took place. Now though the wooden handrail is more than a little unsafe - and anyone applying any pressure to the rail will cause it to break. Note that if someone leans on the rail or is forced into it they will be required to make a dodge/athletics* test to avoid losing their balance and falling down into the hall below (which causes 1d6 damage that bypasses all armour).
*as the situation dictates
NOTES
M2. Guest Quarters.

A small fireplace adorns this small chamber, and little else apart from a thick layer of dirt, dust, and the occasional pottery shard.