Since I posted a few WIP/prototypes for a possible Colony 19 expansion set the other day (see THIS post), I thought I would also post a brief update regarding a few other things that I'm currently working on...
One thing I've neglected to mention thus far is that Purple Duck Games are in the process of designing a mega-dungeon for the Pathfinder system (that they intend to release one level at a time - roughly once a month) ...and I'm pleased to say that I'll be drawing the dungeon maps for the project. These maps will be in the same style as the ones found in the 'Little Book of Dungeons' and I'll also be blowing them up to 'battle-map' scale (for miniatures) to accompany the PDG adventure.
And while I'm (kind of) on the subject of The Little Book of Dungeons, I also hope to have Volume III of tLBoD out by the end of the year (or possibly early 2012).
Something else I've got coming up (that's also in a similar vein to the dungeon books - though still very much in the development stage as of yet) are map packs that expand on the Age Of Shadow world (while also being generic enough to be used with other fantasy settings).
As I say, this project is still in its infancy, but I can show you roughly what I have in mind with this first example: 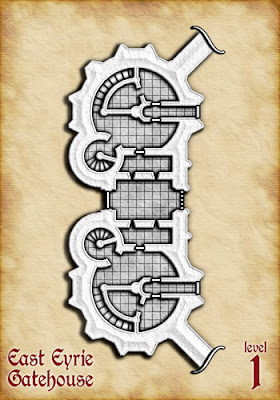 ...which shows the kind of thing/look I'm aiming for.
There are a couple of other things floating around at the moment (like a set of board-game rules (with RPG elements) to go with the Colony 19 tiles, an adventure location posted in weekly instalments on the blog for the Age of Shadow), and hopefully something I might be able to announce by the end of the week (if all goes well) - but that's pretty much it for now.
Hopefully that gives you all something to look forward to in the coming months!