T O P
L E V E L
T5. Servants Quarters/Storage.
This room has seen various uses during its long history, though now it acts as a temporary prison cell/holding area for anyone unfortunate enough to be held captive by the current occupants (largely due to the fact that it has the only lockable door in the whole keep).
NOTES
This area is likely to be one of the focuses of the adventure itself - with one or two captives being held here, or perhaps some item of importance. However, the exact contents/occupants will largely depend upon the type of adventure that the GM is running, and should be tailored to that adventure/storyline accordingly.
T6. Library.

The remnants of tall bookcases lean clumsily against the walls of this room - some moss covered and dotted with old mould, others home to large birds nests. Overhead, several large holes in the ceiling give a clear view to the clouds/stars* up above, and also serve to illuminate the room with vivid/pale* streaks of sunlight/moonlight*

*delete as applicable
OCCUPANTS
This room was once a great library - containing many books of lore and wisdom. Now though it has become a roost for several darkwings (a large black carrion bird - similar in appearance to oversized crows). 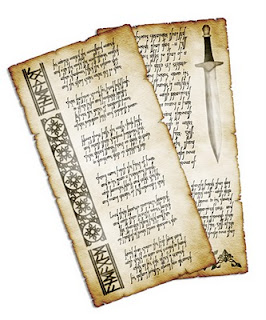